Helping to find your voice: A project by Karen Wise on the science of singing

Singing is part of everyday life: from supporting our favourite sports teams with the National Anthem, to soothing children with a lullaby. Yet, while I always burst into ‘Happy Birthday’ when the cake comes out at a party, my grandmother stays mute. It’s sad that she feels unable to engage in such an essential human activity, however she’s not alone. 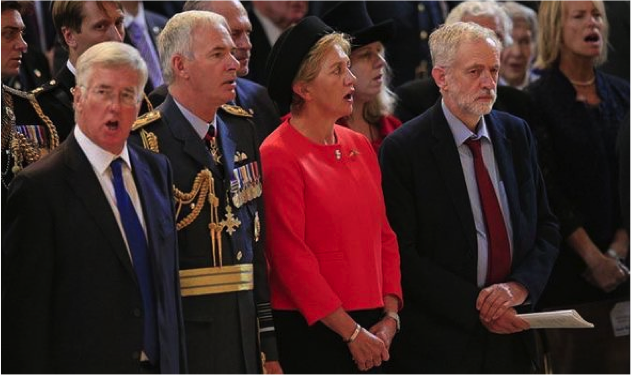 Staying mute: a political stance or is Jeremy Corbyn too shy to sing?

According to a 2005 study by Cuddy and colleagues around 17% of people define themselves as ‘tone deaf’, whilst researchers Hutchins & Peretz (2010) estimate a fifth of adults are ‘poor pitch singers’. These individuals, and the wider population of self-identified ‘non-singers’, often hold negative beliefs about singing and their own abilities. One cause of such beliefs can be criticism from someone such as a teacher or parent during childhood, but this is not the only source.

My grandmother believes that she “can’t” sing and that singing is an all-or-nothing, innate ability. However music education and development expert Graham Welch (1985) conceptualizes singing as a continuum of skill. A skill requiring the coordination of perception, cognition and movement, that we normally acquire during early childhood, but that can also manifest later in life.

Below is a simplified representation of how singing behavior changes over time, based on data from thousands of children (Welch, 2005).

As we get older we develop greater accuracy over our voices, becoming aware that vocal pitch can be consciously controlled (pitch direction control) and developing the ability to move in the right direction, reproducing the ups and downs in a melody (contour accuracy). Interval accuracy is the ability to make theses ups or downs the right distance apart. At this stage, pitching may be fairly good within a phrase – a line sung in one breath – but not as accurate between phrases, once a breath is taken. By the age of eleven the vast majority of individuals are able to sing a simple song in tune (tonal stability). The green arrow represents the development of vocal use, with the range of notes we can sing accurately increasing as we learn vocal control (Rutkowski, 1990). This is an overall trajectory, and not a series of linear steps, as the same child can produce performances at different places on the continuum depending on the difficulty of the song, the context, etc.

Maybe “non-singers” have difficulties with one or more stages of these processes, however nothing concrete is currently identified as little is known about what occurs developmentally after the age of eleven or the role of training or maturation. One interesting finding was a study by researchers Demorest and Pfordresher (2015) that compared the singing accuracy of primary school children with secondary school children (years 7-9) and university students. They found that whilst children’s skills increased dramatically from 5 years to 13 years of age, university students performed at the level of primary school children, indicating that adults who have stopped singing may regress in their singing skills.

But there is hope: an exploratory intervention study by Numminen and colleagues (2015) found that, given the appropriate supportive singing opportunities such as vocal training, negative beliefs of non-singers can be changed and singing skills can be improved.

This transformation intrigues Dr Karen Wise, a Research Fellow at the Guildhall School of Music and Drama. As a psychologist, lecturer, and mezzo-soprano Dr Wise has a particular interest in the psychology of singing, focusing on singing difficulties in untrained and ‘non-singing’ adults. She is currently heading a multi-method, interdisciplinary, intervention project, funded by the Arts and Humanities Research Council. The project, called ‘Finding a voice: The art and science of unlocking the potential of adult non-singers’, is observing the journey of learning to sing in adulthood.

Singing together: over 320 choirs are part of the Rock Choir organisation http://www.rockchoir.com

Despite the growth in music-making opportunities that are ostensibly for non-singers, such as the un-auditioned choral group Rock Choir, Dr Wise is unsure whether they are as inclusive or as evidence-based as they could be. Although researchers are investigating the role of music for health, she argues that studies have, so far, only focused on interventions for specific groups, overlooking the large population of non-singers, and focusing strongly on outcomes rather than detailed description of interventions. The lack of documentation, systematic research and evidence for effective strategies to support adult singers needs is a glaring gap in research, and is one she hopes to fill.

As a singer and teacher herself, Dr Wise’s perspective is a unique one. Not only does she wish to investigate singing in adulthood from a cognitive psychological perspective but also from that of a vocal pedagogue. Rightly, she has highlighted the gap between the scientific community and that of singing practitioners like teachers and choir leaders. Additionally, there is barely any concrete literature on how singing teachers deal with poor-pitch singers as their strategies have not been systematically investigated or solidified. With her work, Wise hopes to encourage communication between these fields to integrate scientific research with vocal pedagogy, piecing together the relationship between singing skills and other aspects of musicality, whilst developing a greater understanding of what it means to sing.

The 33-month-long project is currently ongoing and structured in two strands. The first is a naturalistic study tracking the progress of 20 non-singing adult participants as they undergo a yearlong practical singing course at Guildhall School of Music and Drama (September 2016 – July 2017). They will receive a combination of individual lessons, group singing sessions and workshops.

The researchers used a broad definition of ‘non-singer’, accepting individuals who avoid singing, self-define as tone-deaf, only sing in the shower, or believe they can’t sing. Following a recruitment drive, an overwhelming 355 initial respondents were whittled down to the final 20 participants (11 women, 9 men aged 23-71). They have a range of musical and singing skill levels as well as different attitudes and self-beliefs.

Dr Wise and her team used several psychometric tools to assess the participants’ baseline skills, including the Gold-MSI – a battery of tests that flexibly assess individuals’ ability to engage with music, involving a self-report questionnaire and tests of melody memory and beat perception – and the Seattle Singing Accuracy Protocol, which is an online 15-20 minute test of singing accuracy and related skills. They also asked about beliefs regarding singing, singing identity and self-perceptions, along with participants’ educational level, their engagement with singing activities over the past year, and aspects of health that may affect singing or listening.

The researchers will monitor the participant’s progress in a variety of ways including video recording individual and group lessons, asking both participants and teachers to keep diaries and other reflective writing, and conducting interviews. The assessments used to evaluate the participants’ singing abilities prior to the intervention will be repeated at two more time points, during and after the singing course. Wise hopes to find an improvement in singing abilities over the yearlong training course, whether minor or huge. And of great interest are the kinds of changes that take place and how skills develop, as well as how people experience their journey of learning to sing.

Still in development, the second strand of the project is based on evidence of a correlation between auditory imagery, the ability to imagine sounds vividly in the mind’s ear, and singing accuracy (see Pfordresher & Halpern, 2013). It will look at the relationship between singing, auditory imagery, and other cognitive skills through the use of a specially designed app.

And hopefully this research will help adults like my grandmother find their voice.

For more information on Dr. Wise or the project, please visit: http://www.gsmd.ac.uk/about_the_school/research/research_areas/finding_a_voice/.

Cuddy, L., Balkwill, L., Peretz, I., and Holden, R.R. (2005). Musical difficulties are rare: A study of ‘tone deafness’ among university students. Annals of the New York Academy of Sciences, The Neurosciences and Music II: From Perception to Performance 1060: 311–324.

Numminen, A., Lonka, K., Raino, A. P., & Ruismäki, H. (2015). “Singing is no longer forbidden to me – it’s like part of my human dignity has been restored’. Adult non-singers learning to sing: an explorative intervention study. The European Journal of Social and Behavioural Sciences. 12: 1660-1674.

Rutkowski, J. (1990). The measurement and evaluation of children’s singing voice development. The Quarterly Journal of Teaching and Learning 1: 81–95.

This entry was posted in Invited Speaker Series. Bookmark the permalink.